I wanted this post to be a happy note on the occasion the that #LoveOZYA movement is releasing posters which showcase just some of the fantastic Young Adult (YA) literature by Australian authors which contain LGBTQIA+ characters and content.
They are just some of the resources they provide to highlight home-grown YA literature in a bid to support local authors and local publishing. The posters are available for schools and libraries (and any other organisation) to print and display, like and share. Spreading the love, as it were. You can read more about the history of the movement here.
I was approached by the lovely DanielleBinks to have input into the selection for the posters because of my #AusQueerYA blog. Admittedly, it was the #LoveOZYA movement that, in part, inspired the creation of the blog. There were a number of other factors, not least of which is my own experience.
As I said to Danielle for her post announcing their release:
I didn’t meet another openly gay person until I was in grade 12. That’s a long time to rely on fictional characters for reflections of myself. And at that time, I didn’t find any in books. That’s why I started the #AusQueerYA tumblr. I wanted to coincide with the #LoveOzYA movement to help make Australian LGBTQIA YA stories more visible for those who need them, and make the people these characters represent more visible to everyone else. I’m so thrilled these posters have been made. I wish they’d been on the wall in my school library. 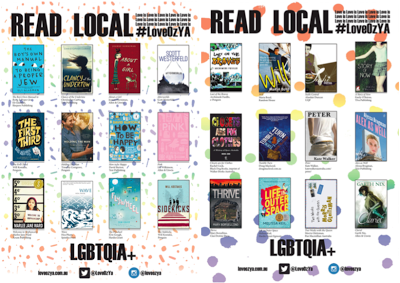 Another reason I felt compelled to collect these titles into an accessible list was that during my Masters, I was writing my own YA manuscript with a gay male protagonist. This required me to find Australian books which to compare mine with in my dissertation.
I remember going to the book launch of EliGlassman’s book ‘The Boy’s Own Manual to Being A Proper Jew’ in 2014 and, during the question time, informing him that his book was the first example of an Australian author writing for a YA audience where a gay male character narrates his own story in first person. It may seem like a bit of academic nonsense but it’s important to me, especially being that it was 2014. It was a bittersweet moment for me. I was happy that an example could now be cited, but I was a bit miffed that it couldn’t have been my own. But that’s a matter for my ego to wrestle with and actually has no bearing on the wider conversation.
I also find it interesting that these posters have emerged amongst the discussion of the Safe Schools Programs. I won’t go on at length, because it is a different issue, but they are related enough for me to say that providing visibility and safety for all people – no matter how much of a minority they are – is important.
In a recent ABC opinion piece, Kevin Donnelly argues that “Criticising Safe Schools doesn’t make you homophobic”. I began reading it with genuine interest. I want to understand from all sides. He makes a point I do agree with: name calling gets us nowhere. But one sentence hurt more than any of the others: “No amount of LGBTQI gender theory can ever deny the fact that heterosexuality is the norm and that procreation is best served when women and men are involved.”
Ok, in line with your title and argument, you might not be homophobic, but this was a giant, privileged slap to the face. Hasn’t history taught us that things done in the name of “normality” are not always correct? I’m not even suggesting here that the percentage of the population that identify as LGBTQIA+ will necessarily grow in the future (although it would make sense that if it was more acceptable, then perhaps it would as there are still people who don’t feel socially comfortable in doing so). And I’m sorry, but I missed the step that took us from an anti-bullying program to procreation.
It brought to mind an article that Ambelin Kwaymullina wrote on diversity and privilege. She says, “the denial of anyone’s rights – and the diminishment of anyone’s humanity – denies everyone’s rights, and diminishes everyone’s humanity.”
For me, what it boils down to is that regardless of the percentage of our population that identifies as LGBTQIA+ that each and every one of us doesn’t deserve to be bullied simply for being who we are, whether or not we’re “normal” (not my word). This stands for race, culture, ability and sexual identity.
So, to bring it back to the original point… anything that contributes to empathy and understanding is worthwhile. As I said earlier, I never saw myself in the books I read as a teenager. Not once. The closest I got was secretly watching Will and Grace while my parents were out. And now as an adult, as much as I enjoy that show, I know it doesn’t represent me. So for the sake of everyone searching for themselves in literature, something like #AusQueerYA, something like these posters is a powerful resource for any organisation that engages young adults. A big thanks to Jessica Harvie for designing them and Amelia Lush for her contributions (she’s a powerhouse bookseller!) and of course Danielle!
This Kill Your Darlings article says it much more thoroughly and eloquently than I, but there are many reasons why LGBTQIA+ young people identifying with fictional characters is a positive thing. The books on this poster, on my blog, while they certainly are for people experiencing similar situations, it is not an exclusive club. It is exactly the same way that literature with straight protagonists/characters are not purely for straight people. I would know, I’ve read enough of them, being that it is ‘the norm’.
But just an FYI, majority does not equate normality.

Great article Michael! Like you, I never had the chance to read books with queer characters while growing up. I wish I had because it would have helped me to understand myself a lot earlier. I've just followed your Tumblr, it looks really interesting and I'm sure I'll be reading some of the books you blog about!