I am not a fan

13 April, 2020
In 2019 I was invited to be a part of a Sydney Writer’s Festival session called ‘To All the Fandoms I’ve Loved Before.‘ When the programmer asked me, she said “I figured you could talk about your obsession with Tori Amos.” I was over the moon at the thought of being able to geek out in such a big way. To even be asked because my geek was well known enough. I proceeded to write and perform the following piece. It wasn’t recorded, so I’ve decided to put it here on my blog, so you can all know the extent of my nerdiness. I was also the only one at the session to have prepared a slideshow…

I Am Not A Fan

This session is called ‘To all the fandoms I’ve loved before’.

In 1996, Tori Amos said, “I hate the word fans, I’d like to call you Ears with Feet.” She was gushing over the dedication her listeners display in coming out to her shows.

It might be true that at the time I had no idea who Tori Amos was, being in year seven and only having a cursory relationship with music. But it was a moniker I was destined to adopt. To quote her lyrics, which I do a lot, “It will all find its way, its way in time.” 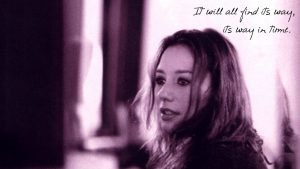 She had been a child protégé pianist and minister’s daughter and she had something to say. Her music explores so many things, including sexuality, feminism, politics and religion. Some of her charting singles are ‘Crucify’, ‘Silent All These Years’, ‘God’, ‘Cornflake Girl’, and the stylistically misleading remix of ‘Professional Widow’.

I was to discover her in an unconventional way. It wasn’t her voice I first heard, but one of my closest friends in year 11 music class as she practiced for an assessment. “When you gonna make up your mind,” she sang, “when you gonna love you as much as I do.” 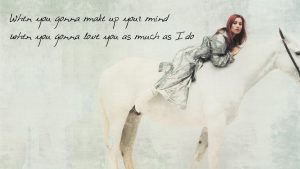 It struck a chord with me and I wanted more. That song, Winter, was the doorway to Tori Amos and her particular way with words and music.

“The way she paints the world, I want that in my life” 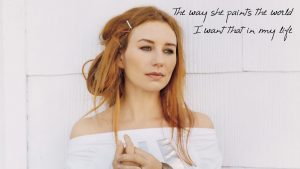 Winter was also the song I would use myself three years later when I unsuccessfully auditioned for the first season of Australian Idol. By then, I was a junkie. “She’s your cocaine.”

My final years of high school were an education. I had five albums to catch up on.

One friend and I would listen to From the Choirgirl Hotel while crying together, feeling stronger for the vulnerability. Another would burn me mix CDs of rare tracks and B-sides. I would rage along with Tori in my bedroom as she expressed emotions in ways I’d never imagined that spoke to my scared and hurt sense of self. I was a closeted gay boy in a very religious family.

“Chickens get a taste of your meat.” By the time Scarlet’s Walk was released in 2002, the first album of Tori Amos originals I’d been on board for, I was well versed in her back catalogue and had ingratiated myself into the online world of the likeminded. The other Ears With Feet. In the years before social media and smartphones, it was all forums and message boards. The Tori Forums were an almost daily ritual. I would check who had replied to my threads, see what new discussions had been posted, say which were my top tracks from this album or that, wished ‘littlebluegirl88’ a happy birthday, and gush over the outtake photos from a magazine shoot.

Scarlet’s Walk hit me like hug with the force of a freight train. But my time getting to know Tori’s music had prepared me for the embrace. What I was not prepared for, perhaps, was the tour that followed. Seeing Tori Amos live was a life changing experience. Not only was the concert itself a revelation in what emotions were possible in Sydney Opera House surrounded by people all staring at the woman on stage straddling her piano stool to reach her three keyboards, but it also opened my world to engaging with other people in real life. The pre-show meet and greets are a ritual for many Ears with Feet. I thought nothing of taking the day off work to queue for four hours by myself – yes, I’m the level of geek that does not need company – waiting for a thirty second interaction with the person who had changed the course of my emotional sense of self. Apparently, neither did 864 other people. As we waited, we made conversation. Swapping current favourite tracks or personal insights into lyrics. Subtly, or not so subtly, trying to one up each other on the extent of our Tori knowledge. These were my people. I’ve made good and long lasting friends in those queues.

I went on to not only attend, but organise Tori Meet Up groups. Yes. That is what it sounds like. I’d meet up with near strangers for a hot drink or a meal and we would talk Tori. We would loudly debate the merits of each album in turn, ignoring the looks other café patrons would throw us.

“Oh the moment when she sings “you could taste heaven perfectly” is divine!” 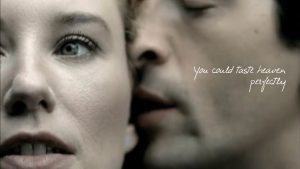 And it was. Not only the moment in the song, but the moment you share its transcendence with other people.

The online sphere changed. Facebook groups were the new home for the Tori Obsessed. They’re still a part of my almost daily routine. I find the way these groups interact with each other so wholesome and supportive. With only a few words you can be bolstered in the way you had hoped to be. I’ve posted things like “Give me your best angry Tori”, or “Break up Tori, not bitter, melancholic” and within a few hours you have a beautifully community curated playlist responding to your mood, and a whole bunch of encouragement.

“This is cooling faster than I can” There’s an instant spark between Ears With Feet that is hard to ignore. One of the most significant in my own life unfolded like this:

I was at a party I didn’t plan on attending, but life had led me there. The group I was with went to find our 1 A.M. kababs. The conversation turned to how one person thought that not liking Pink, the singer, was a dumpable offence. It was at that moment our footpath congregation was split in two by passing pedestrians and I was alone with a person who I’d only spoken with briefly.

They said, “The only person I’d dump someone over is if I found out what they thought about Tori Amos.”

My mind spun. Their words could be interpreted two ways. So, I took a punt.

“Oh my god,” I said. “I have a Tori Amos Lyric tattooed on my body in her hand writing.”

They looked at me dead on, and with a seriousness I’ll never forget said, “So do I.”

Thus began a friendship that has been one of the most insightful and transformative of my life. It’s truly amazing how quickly a relationship can build when you have fifteen albums and then some to draw on. There is a shorthand to knowing someone’s music so well you can refer to major concepts and immense emotions in passing and they know where you’re at. Saying “I want you to hear Taxi Ride right now”, because “on days like this, you know who your friends are”, or letting them know I’m feeling raw because that morning I had a rough one-on-one with Smokey Joe. We now ask each other for prescriptions when we feel lost and need guidance. Tori always has something for us. Every mood, every situation, every piece of ourselves, each powerful tear we hold in our hands and don’t know what quite what to do with, all the bliss we struggle to describe. She’s there for us. For all of us. Being an Ear With Feet isn’t an exclusive club. There’s always room for more. Just start listening. If you want to ask for a prescription, recommendations will come freely and from the bottom of the heart. Michael Earp is a writer and bookseller from Melbourne, Australia, the editor of Kindred

A Moment of Note

Today’s the day. Officially. Something that I’ve been working towards for close to sixteen years in my own, meandering way. From today you ...

I am not a fan

In 2019 I was invited to be a part of a Sydney Writer’s Festival session called ‘To All the Fandoms I’ve Loved Before.‘ ...