8 June, 2019
Last week, Kindred: 12 Queer #LoveOzYA Stories was launched into the world.
I have no idea how to approach this blogpost so I’m going to tell you what happened very briefly, followed by an inept summary of how it collectively made me feel.
Before I begin, I also realise that I haven’t written about Sydney Writers’ Festival where the book was launched in Sydney. It’s a sign of how busy my life has been that I haven’t had a moment, and I’m regretful that I’m going to be so brief about mentioning it, too. The panel at Sydney Writers’ Festival was a fantastic way to talk in depth about where this anthology came from, the path the contributors took in writing their stories, and where we’re at in Queer YA fiction at the moment. It was an amazing privilege to be able to share as part of such a significant festival. If you see a Kindred panel on a writers’ festival near you (likely, as the Australia Council for the Arts gave me a whopping grant to make that a possibility), come and see us, if you can. The Melbourne Launch was something else altogether. I’d be lying if I didn’t say I set out to make this event more of a spectacle than any other book launch I’ve been to. Really, the fact that this book exists makes my heart swell and I wanted to manifest my feels. Swell to the size of a circus tent. Luckily, there’s one of those available for hire! The GORGEOUS MelbaSpiegeltent, tucked away in Collingwood near Circus Oz, was the perfect setting for my larger-than-life, but entirely fabulous, dream. And it only took roughly four months of planning and organisation, consuming all my free time, and only happened thanks to the Australia Council, but happened it did.
The night opened with a rich and informative Welcome to Country from Ron Jones. Everything we do is on Aboriginal land and sovereignty was never ceded. We may be in a fantastic circus tent but it is on Wurundjeri land. The glamorous Philmah Bocks stepped out on stage to steer the bus for the night, dressed to the nines which was only fitting for the occaision.

She introduced the first of our Teen Drag performers, the amazing Theresa Problem, who had countless costume reveals as she performed to Madonna’s ‘Dress You Up’. 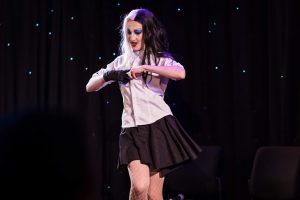 We were lucky enough to have seven of the twelve contributors there, so we came out on stage. Jax Jacki Brown, Claire G Coleman, myself, Alison Evans, Erin Gough, Marlee Jane Ward and Nevo Zisin. From the very beginning of my planning, I’d thought it would be good to have a few readings from the stories. I knew I could easily get the authors to read their own work, but I decided that what would be more special is to find some book-loving queer teens, put a copy of the book in their hands and ask them to read aloud from the story that they liked the most, or most identified with. This meant that we were all lucky enough to hear Madi read from ‘Waiting’ by Jen Wilde and Peter read from ‘Questions to Ask Straight Relatives’ by Benjamin Law. It was more moving than I anticipated. Then the audience got to hear from each of the contributors that were there. We each said brief summaries of our stories and then chatted about the process of putting it all together.
Along with the many thank yous, the official part of the night came to a close with another performance from Chanel, teen drag queen extraordinaire who brought the house down with her death-drop, drop-splits dance to ‘Applause’ by Lady Gaga. Then we signed a WHOLE BUNCH of books while we ate AMAZING cupcakes baked by Jess, who I couldn’t recommend highly enough for all your cake needs. I also invited Minus 18 to be our special guests for the night. They’re an amazing charity that are run by and for queer teens. It was so special to have them there on the night and involved in the lead up to it. They were the ones who put me in touch with the fantastic performers and readers. You can donate to them directly HERE. The work they do is brilliant! My lovely bookshop, The Little Bookroom were also there in number! And they donated 10% of the night’s sales to Minus 18. It really was a night for spreading the love. Amazing Jes Layton was there live tweeting! I was really moved by this tweet. But you can read the whole thread HERE.

This Kindred Launch is really setting the bar for #LoveOzYA in terms of accessibility, inclusivity and most of all #TeensToTheFront ???? #KindredStories

The team from The YA Room were there and they’ve put together an incredible video of their experience. Thank you!
I think it all hit home – just what we’ve created – when two of the teen volunteers from Minus 18 came up to me towards the end of the night. “We’d like to thank you for putting this book together for us and people like us,” they said.
Because that’s it. I wanted this book to reach queer teens, first and foremost. Right from the first idea, I wanted queer teens to feel seen and feel like they had a book that had been made for them.

The whole thing has been a wild rollercoaster ride of emotions. I’m struggling to find the words because what I feel seems too big for words. Or rather, my words no longer count. The book is done, it’s out there in the world for queer teens (and anyone else who wants to read some amazing stories). What I have to say is not of consequence. I’ll just ruminate on the overwhelming feelings of love, joy and general queer affections I have for this book, the people who helped me put it together – Nicola Santilli most of all, you’re a wonder! – and the reactions I see when it finds the homes it was always destined for. Also, I was LIVING in this suit!
These amazing photos from the Melbourne launch are all by the fabulously talented Piccoloangelo Photography.
And, lastly… bonus content!

I asked each of the authors to contribute a song or two that somehow tied with their story. Thematically, stylistically, something their characters might listen to, or merely something they listened to while writing it. It has led to a fantastic playlist you can listen to while you’re hosting a dinner party, getting ready to go out, generally being queer or actually being an ally.