I was trying to decide whether or not to do a list of my favourite books that I read in 2014, partially because I started this blog to leave the reviewing behind and partially because It always becomes a bit more than I bargained for. For example, I convinced myself that it would all be fine, I’d just do a top five. But that quickly turned into a top five with extra special mentions, which then couldn’t fairly be called special mentions so it became a top ten. Then fiction and picture books needed to be separate categories too. See how my mind works?
So, without any further ado, here are my favourites from what I read in 2014!

I waxed lyrical about this on my old blog. But I’ll repeat myself enough to say that this is one of the most astounding books I’ve ever read, and that I hope that everyone reads it. I even gave a copy of it to each of my family members for Christmas.

I’ll Give You The Sun by Jandy Nelson

This is a wonderful follow up to Jandy’s lovely ‘The Sky Is Everywhere’.And while I’ve always thought that I loved The Sky is Everywhere, I was blown away by I’ll Give You The Sun. Without diminishing Sky, Sun is so much better! Jude and Noah are twins. They are incredibly close at 13, but by 16 are not speaking. Noah narrates the younger years and Jude the older, but the dual narrative highlights that both only have half the story and as they crash land into their teenage years they both learn more than they thought they ever would. I don’t want to tell you any more, just add it to your reading list, now.

If you know me, you’ll probably know that I’m just a little bit (read: A LOT!) obsessed with Kate DiCamillo. This was the only one of her novels that I’d not read, so I decided to remedy that. I was glad I did. Kate has a way with words that floors me. She finds the marvellous in the mundane, the beauty in the everyday and gives even the smallest stories grandiose heights, even if it is only in our hearts. She can write; she knows what she’s doing. Pick up any book with her name on it. Read it. Also, follow her on Facebook. Her posts are little rainbows in my day.

Jim’s Lion by Russell Hoban and illustrated by Alexis Deacon

The last time Alexis Decan illustrated Russell Hoban the result was the trippy but brilliant Soonchild. So when Alexis re-interpreted what had previously been published as a picture book into illustrated fiction genius, I was excited. Jim is in hospital and is worried that he won’t wake up from the operation that the doctors need to perform. That fear spills into his dreams, which are beautifully explored is Alexis’ new illustrations. Jim’s nurse tells him to look for his animal finder in his dreams to bring him back from wherever he ends up. The Lion is waiting for him.

Plenty is a small novel, ideal for 10+ readers, but I thought it was just wonderful. For me, it was reminiscent of Kate DiCamillo’s style of having big ideas in everyday scenarios, with just as exquisite writing, but with an Australian flavour. All good things. The way Ananda has explored so many themes and ideas without beating you over the head with any of them makes this well worth the read for anyone.

Vango Book Two: A Prince Without A Kingdom by Timothée De Fombelle

It’s hard to talk about Vango 2 without referring to Vango, the first in this two part series, because really they should be one volume. But as epic, 1000 page novels don’t seem to get published any more as they did in centuries gone by, especially for the young adult or teen market, this story has been split into two. It’s magic realism, without the magic; it’s historical fiction that feels like a cinematic masterpiece. Set in the 1920s and 30s between the wars, it has a vast cast of characters that each get their own moment to shine while the story revolves around Vango, a young man who is as enigmatic to himself as he is to the reader. I would happily put these books into the hand of anyone over the age of 11, no matter what their taste in reading. I’m not a particular fan of historical fiction, but I loved every minute of it, right to the very end of the second book.

You may wonder why David Levithan gets two books on this list. There is a simple answer: I read them both in 2014 and they both deserve a place. I’ve only read three of his books now, but he is fast becoming one of my favourite authors. I’ve already bought most of his books and they are sitting on the shelf waiting to be read, I’ll get to them in 2015, I’m sure. But Boy Meets Boy is great. It’s the YA novel that the ‘straight’ population have been reading for decades, but now for gay teens. By that I mean it removed enough of the existential angst about being gay to leave enough room for a feel-good high school romance.

Someday This Pain Will Be Useful to You by Peter Cameron

This book was lent to me (and I still can’t work out by whom. Holler at me if the copy I’ve got is yours) and it was fantastic! A cynical teen is coming to terms with the flawed adult world around him plots his escape from Manhattan and avoids starting college. Very engaging.

I was given an advance proof of this book because it holds almost the exact same themes of the novel I wrote for my Masters although Jewish, rather than Christian. I read it in a single sitting and I thought it was great. A boy comes to terms with his homosexuality within the context of his Orthodox Jewish faith. This book is not just for gays and not just for Jewish people, it’s not just for teens either. It has led to some very interesting discussions (I won’t say arguments) with my friends and colleagues over the place of straight authors writing gay storylines, but that’s the topic of another post, I think. All in all, I would suggest reading it before you judge it on that front.

Adam Rapp has said that while he was writing this novel, he was haunted by many questions, among them: “When we have nowhere to go, who do we turn to? Why are we sometimes drawn to those who are deeply troubled? How far do we have to run before we find new possibilities?” 33 Snowfish is not for anyone who likes to look at their sugar coated, candy coloured childhood through rose tinted glasses. It’s for those who want a glimpse of the stripped bare, visceral and dark corners of childhood that most would rather not think about. I was going to write that it’s equal parts bleak and hopeful, but I’m not entirely sure that’s true – the scales have not settled. Whatever it is, it’s a reading experience you won’t easily forget.

This is a bonus entry. I was going to limit the list to 10, but then I saw this and remembered how much I laughed! This is book 3 and it’s the best one yet. I heartily enjoy this series.
There was one other book that I wanted to put into this list, as I read it over Christmas. But as it doesn’t get published to August and I’m not allowed to talk about it in any detail, I’ll just leave that till next time, as I know I’ll be re-reading it. It would have muscled in there amongst the top 3…

The Bear’s Song by Benjamin Chaud When I first read this, it made me so happy. I felt like I was glowing and I couldn’t stop smiling. It was the same when I re-read it. Do you need any more invitation? 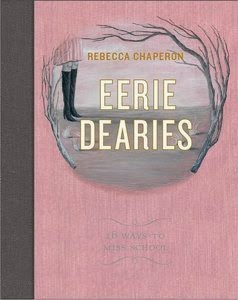 Put into my hands by a wonderful bookseller, I’m still not entirely convinced that this picture book is for children. It’s much the same way that Edward Gorey (who I very much liken the sense of humour in this book to) also, apparently, wrote for children. But maybe that’s not the point. Teenagers, I’m sure, would get a kick out of this alphabet of ways to miss school that includes things like ‘Vortex’ and ‘Zombie Apocalypse’. 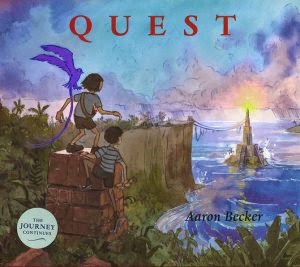 The lovely follow-up to the stunning debut ‘Journey’, Quest continues the adventure in a fantasy kingdom that requires all the magic crayons/markers to be collected to restore balance, free the king and oust the baddies. It’s what wordless picture books should be like. And if you’re one of those people who say they don’t like wordless picture books, let me show you the door… 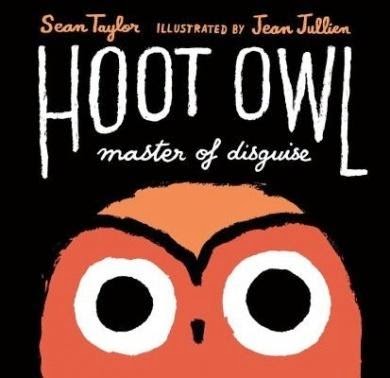 I sold this book to my booksellers and had great fun doing so. I read it aloud (storytime-wise) to practically all of them, and after a month of reading it 4 or 5 times a day, I can tell you that I love it just as much as I did the first time I heard it read to me. “Everyone knows that owls are wise, but as well as being wise, I am a master of disguise.” To read it with the narration of a film noir detective is perfect. I will never tire of it.

Bob Graham’s knack for capturing the global and personal simultaneously in an understated way is why his books resound with so many people. I loved this book on my own account, but a recent reading-by-request with my 3 year old nephew showed me that it’s not just the adults that get him. Kids get him. 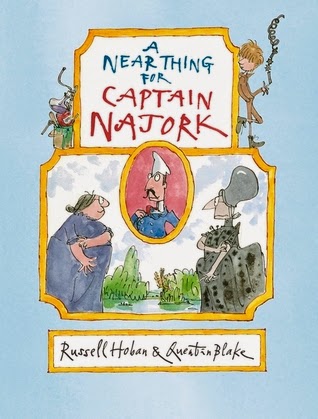 My favourite way of describing this book is “wildly entertaining, and wildly inappropriate”. But that really just means that wait until you child is 8 or 9 (or 20) before sharing this book with them. Until then. It’s perfect for your own shelf!

Beautiful. From the first time I saw its cover, I knew I would love it. It’s a series of wordless before and after illustrations that are thought provoking, intriguing and on occasion tell a story. Perfect coffee table book, especially with children about, you can dip in and out, you can read it all the way through.

Ever thought there was treasure lurking just beneath the surface? Then this book is for you. Just beneath its cover lies a gem of a story. Jon Klassen is fast becoming an international favourite and it’s no wonder when all his books are brilliant. Teaming again with Mac Barnett the two create something spectacular.

The Pied Piper of Hamelin by Drahos Zak and Robert Holden

Drahos Zak is amazing. Everytime I read a book that he has illustrated I find myself thinking that I want more. Why don’t I own more of his books, or at least have read them? I’ve owned this one for years and never got around to reading it, and what a fool I’ve been. Robert Holden’s retelling is wonderful too. He’s created a rhyme that doesn’t rely on Browning’s to tell the story. 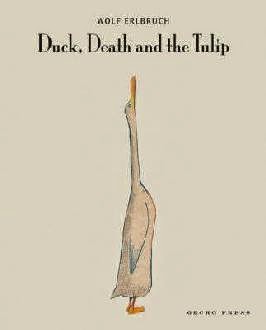 Duck, Death and the Tulip by Wolf Erlbruch
A surprising look at life, death, and the afterlife played out in a conversation between a duck and a character called Death who she meets and turns out has been following her her whole life. Beautifully illustrated and thoughtfully posed, this book asks the question: who knows what happens after death?
Well, there you are, some of my favourite reads this year. If you want to know more about any of them, ask away. Or tell me what you read and loved.