Not Yet All Told

I’ve been doing a lot recently. Professionally, I guess.

Since the beginning of May I’ve had:

I know this is nothing compared to some authors doing the rounds, but it’s quite a lot for me. I’ve done festivals before, but it’s my first year with my own work to talk about. 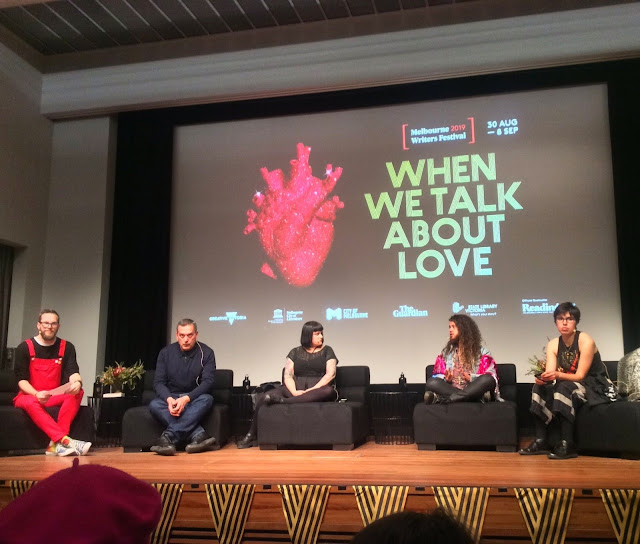 I’ve also had the organising of most of those, to a degree. The incredible grant I received from the Australia Council of the Arts is really helping spread the word about Kindred and getting it to audiences around the country. However, I’m administering it… and here I thought editing an anthology required a lot of emails!
So even though I’ve got no more festivals for the rest of this year, doesn’t mean my workload is slowing down any time soon. I’m in the throes of organising where Kindred authors will be visiting next year, and there are a few other kinds of events I’ve got coming up, too. (More about those later.)
I’m equal parts buoyed and exhausted by everything I’ve been doing. The reaction to Kindred has been incredible. People are so enthusiastic about it. It’s been getting some amazing reviews too, including in The Age and in Magpies Magazine
But it’s the crowds that are so encouraging. Seeing the faces in the audience when you’re on a festival stage and then the lovely things they say afterwards, it’s amazingly heartening to know that it’s finding its place.
Just last weekend in sunny Brisbane there was a sold-out crowd, a room full of engaged and charming people laughing along with our antics and nodding knowingly at our frustrations with representation. I even had this hilarious tweet sweeten the deal:

My Patronus is @littleelfman‘s wardrobe! 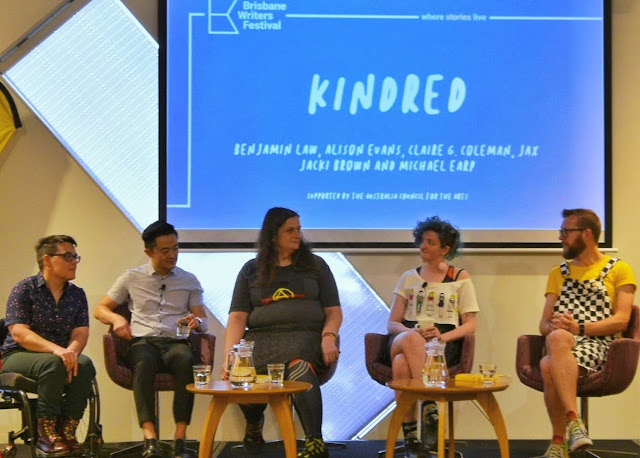 But all this joy and reward comes at a cost. I’ve been pretty open with how public speaking is not a comfortable experience for me. I have a freak out before every session, and before Brisbane’s YA day I had a complete panic attack and felt my body shutting down. I’m not fishing for anything here, more just flagging that things aren’t all breezy for those who also don’t like public speaking. Everything turned out okay. Really well, in fact. But that kind of logic doesn’t come into play beforehand. I just need to acknowledge where I am to myself, and out loud, and then get on with the show as best I can.
There’s another cost as well. Time. All this planning and festival-ing has meant I look back now and see that this year all I’ve achieved in my writing life is an edit of a novel for my agent (which took 5 months longer than I hoped it would) and I wrote one other piece. Not so great considering we’re 9 months into the year. When you add to that the commitments I have for the rest of the year,  I honestly don’t see myself getting any writing done this side of new years’. 2019 is not going to be the year I get my next project finished (or even started).
It’s a hard learning curve in time management, let me tell you!
I’ve got a few things coming up where you can come hear me talk (not just about Kindred!). (Dates link to details/RSVPs)
On the 25th of September I’ll be reading a personal memoir piece at Queerstories. This is the only thing I’ve written from scratch this year (as previously mentioned). This is remarkably different to everything I’ve written before. So, if you want to see another side of me, you’re most welcome. Queerstories is my happy place. If you haven’t been, I can’t recommend it enough.
On the 7th of October I’m in conversation with Holden Shepherd, award winning debut author of Invisible Boys. We’re going to talk about all things Queer YA, growing up gay in country towns, the writing process, and juggling your past in your writing. It’ll be a fun and frank discussion. Come along!
On the 9th of October I’m on a panel with Demet Divarorian and Jodi McAlister at the State Library of Victoria where we’ll be reading from our work and being interviewed by teen shadow Inky Judge Isabella Ciccone. This is a creative collaboration with Writers Victoria. Hope to see you there!
Later in December I’m also at the Victorian Association of Teachers of English national conference. So, if you happen to be a secondary English teacher and are attending that, look out for me in the program and come along to my session. I promise I’ll try and be entertaining for you (after my freak out).
Not yet all told, it’s been a busy year. But so very rewarding.
Now, back to the delightful grindstone.