“When did you know you wanted to be an author?”

A common question pitched at writers is “When did you know you wanted to be an author?” and more often than not, the answer is some variation of “Always! I wrote my way out of the womb.” Or, “My mother published a literary journal of my work on the home computer when I was four.” Or, “I’ve done nothing but write as far back as I can remember, I never even watched a single TV show because I was too busy writing.”
Well, you all can probably recognise hyperbole when you read it, but you know what I mean, right? I’ve heard many authors talk over the years and lots have said that writing has always been on the cards for them. I think that’s great that so many people knew what they wanted to do from such a young age, but it’s not like that for all of us. I know that I’m not quite there yet, as far as being published is concerned, but as I spend much of my spare time writing and it’s all I can think about, I wonder how I would answer such a question (you know, if someone ever thought to ask an unpublished nobody such a thing). And I could not say that ‘forever’ would be the correct answer.
When I was young, I enjoyed books as much as the next kid, probably coming into my childhood prime in late primary school, becoming obsessed with Emily Rodda’s Teen Power Inc series and the Usborne Puzzle Adventures (for the full extent of my obsession, reaching into adulthood, see this, and this). In high school I don’t remember reading much at all. I never finished a single set text for English. I did go through a bizarre (for me, at least) period of reading Minette Walters and a few other crime writers. (That has been the extent of my crime reading.) But it wasn’t until I started working in a bookshop, at age twenty that reading really took off for me in a major way.
As for writing, I never really thought much about it. As alluded to before, I never excelled at English, even if I did enjoy it; I never applied myself. But that didn’t mean I wasn’t writing. From around the age of thirteen or fourteen (about the time I was becoming aware that I was, in fact, gay – although these two things are probably unrelated) I started writing poetry. I was also paying more attention to the lyrics of the music I was listening to. Words, in general, were becoming interesting. And even though I wrote a lot (I mean A LOT – I’ve got notebooks up the wazoo filled with absolutely terrible teenage poetry), I never stopped to think, ‘Maybe this is something I could take seriously. Maybe I could be one of those mythical authors.’
Just for fun, here’s a little ditty I wrote back then. I was tossing up which one to use, but let’s go with the first one that stood out to my fourteen year old self as special. It’s the first poem that I wrote that I thought was worth keeping, and it made me write so much more. 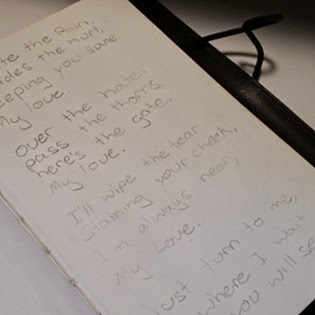 Despite the pain,
besides the hurt,
keeping you sane,
my love.
Over the hate,
pass the thorns,
here’s the gate,
my love.
I’ll wipe the tear
staining your cheek.
I’m always near,
my love.
Just turn to me,
to where I wait
and you will see
my love.

Teenagers, eh? (Don’t worry, I didn’t always write in rhyme)
But I wrote and wrote with careless abandon. I didn’t take it too seriously, so I didn’t stop to worry if it was actually any good which meant I kept writing. I wrote my angsty cliché poetry right into my twenties. And then occurred the happy overlapping of my ferocious writing and my bourgeoning passion for reading and I (finally) had the thought: ‘This is it. The When-I-Grow-Up moment.’
Knowing that I was most (read: only) interested in books for children and young people, I had the brilliant idea to study early childhood teaching rather than writing. Then, I told myself, I would have a job at the other end rather than being a penniless writer. And the holidays! Think of those holidays in which you could write! I wasn’t halfway through before I realised that teaching wasn’t for me, but I didn’t regret my choice, I was learning all about child development and all that other good stuff. And I managed to get some creative writing subjects in there anyway, as well as a creative work for my Honours thesis. (I also realised that the holidays that teachers get aren’t the unoccupied skip through the flowers that I first thought).
So, now I am focused (ahem – just ask any of my myriad of social networking profiles) and writing with purpose. Watch out world, here I come!

Please to see you have finally found your way. I have a theory that being published is three-pronged – talent, hard persistent work and a little luck. You have the first two happening and the luck will come. Luck can be made with taking every opportunity. It's just a matter of when the luck kicks in. Maybe soon. Maybe a little longer than expected. Love this post. Wishing you good luck.

Thanks Sandy. I reckon you're right about that. And I have no misconceptions about how long it can take to get there, I'm just happy to be trundling down the right path now. 🙂